Real-life superheroes: These Filipinas are saving our seas 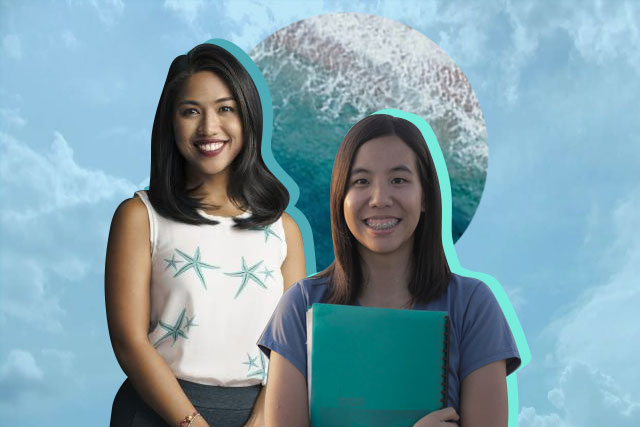 Our oceans are our country’s most prized natural possession. The Philippine sea alone occupies an estimate of five million square kilometres. According to the Nations Encyclopedia, all of the waters surrounding the Philippines are branches of the Pacific Ocean. The eastern coast of the Philippines faces the Philippine Sea, where the Philippine Trough (Emden Deep) plunges to 10,430 meters (34,219 feet).

Because of this, our country forms an ocean region that has long been recognized as the world’s center of marine biodiversity. Some 400 to 500 species in 90 genera of reef-forming corals are believed to exist in this region. Sulu-Sulawesi Sea, a 900,000-square-kilometer marine eco-region that lies at the apex of the Coral Triangle (70 percent in the Philippines, 20 percent Indonesia, 10 percent Malaysia), is home to some 2,500 species of fish.

But as of today, Philippine seas are suffering with plastic pollution, coral bleaching, dynamite fishing, and various other polluting agencies.

In 2018, an administration lawmaker revealed that the Philippines has become the world’s third largest source of plastic leaking into the ocean and has among the highest trash collection rates in Southeast Asia. Scientists are now sounding the alarm on the plight of coral reefs nationwide, as the rise in our climate temperature is causing coral extinction. Our oceans—our country’s main source of energy and livelihood—are dying because of manmade acts.

However, these two Filipinas are fighting to save it.

There have been public outcries and strong initiatives by many Filipino citizens, to help save our oceans—and Anna Oposa and Erina Molina are at the frontlines of this movement. They are strong advocates of salvaging marine life and steadfast environmentalists, and Preen.ph was able to reach out to them on their passion for the ocean.

Anna R. Oposa is currently the executive director and chief mermaid of Save Philippine Seas. Anna graduated with a degree in BA English Studies from the University of the Philippines-Diliman, and obtained her MSc in Conservation Science from Imperial College London.

Save the Philippine Seas is a movement to conserve and restore the Philippines’ coastal and marine resources through information, education, and communication activities and community-based projects. Anna has also founded the Shark Shelter Project, which builds the capacity of local communities in Daanbantayan, Cebu, to protect thresher sharks and their coastal and marine resources in 2012, and the Sea and Earth Advocates Camp in partnership with the US Embassy, an environmental education and leadership program that empowers young Filipinos to be leaders in conservation in 2015.

On her love for the ocean

“How do I love thee? Let me count the waves! The ocean occupies 71 percent of the Earth and gives us at least half of the oxygen we breathe. It’s also home to the most fascinating species. As the second largest archipelago in the world, the Philippines has every reason to conserve our seas.”

On how she started Save Philippine Seas

“My dream was to be a Broadway star! [Laughs] It was a large-scale illegal wildlife trade case that inspired us to start Save Philippine Seas. It was supposed to be just a hobby but it ended up becoming my passion and purpose.”

The chief mermaid is convinced that Filipinos still need a lot of work to do to convince people around us—and our government—to take action. She mentioned how we can start by writing letters to leaders about environmental issues that we are concerned about.

Did you know that less than 30% of researchers worldwide are women? Yesterday (Feb 11) was the International Day of Women and Girls in Science, a reminder that science doesn’t have a gender. A big shoutout to my mentor since 2011, Dr. Margarita Lavides, who helped me become who I am today. Thank you po for all the learnings in science and conservation. 🙂 I’m also honored to be featured along with other amazing women in science! Thanks @insidenatgeo #Repost @insidenatgeo ・・・ Today marks the International Day of Women and Girls in Science, an essential reminder that science doesn't have a gender. But currently, less than 30% of researchers worldwide are women. Here are four female Explorers that are forces in their field & paving the way for more women: 1️⃣ Zambian wildlife biologist Thandiwe Mweetwa, who works with community-based conservation group @zcp_org to protect large carnivores and their habitats 2️⃣ Environmental scientist Erina Molina, who works with fishermen in the Phillipines to identify vulnerable or extinct reef fish species 3️⃣ Researcher Anne Jungblut, who examines microbial diversity in the Polar Regions to assess and predict the effects of climate change 4️⃣ Denise Pozzi-Escot, charged with protecting and preserving Peru's ancient Pachacamac settlement as @museopachacamac's director #insidenatgeo #InternationalDayOfWomenAndGirlsInScience #womeninstem

National Geographic Young Explorer grantee Erina Molina has done over a hundred ocean dives in her lifetime, and is currently pursuing her master’s degree in Environmental Science at UP Diliman.

After graduating with a degree in Environmental Science from Ateneo de Manila University, Erina implemented research with environmental NGO, Haribon, to identify endangered fish species. Among the species that she encountered during her underwater expeditions are the endangered bumphead parrotfish and the dugong.

“My mission is to highlight the beauty and importance of our ocean today,” Erina told GMA News, “And at the same time empower people from all walks of life to be part of biodiversity conservation: from young to old; farmers to fishers; rural to urban dwellers.”

On the beauty of the ocean

“I love the richness that the ocean has to offer. I’ve seen the beauty of our coral reefs first hand, having been able to log dives around the Philippines, and I’ve also seen it from the eyes of our fishers. I love its vibrance and energy, knowing that these reefs provide food and livelihood to more than 63 million people and at the same time ensuring the food security of the Philippines.”

On her passion on marine environmentalism

It all started when I was 15 years old—when I first experienced snorkelling. I was amazed by the diverse life I saw underwater. After that, I learned how to scuba dive which all the more got me hooked into the underwater world. I wanted to preserve it for future generations. I want to prevent species from extinction like the bumped parrotfish and the dugong.

Growing up, I always thought I would become a medical doctor because its what my parents wanted me to be. However, I realised that there is so much more to do other than being a doctor. I took up environmental science as a course because it sounded fun and exciting. I enjoyed being in the field exploring new places and what nature has to offer. But it was during my first snorkelling trip when I realised that the marine world is worth exploring. When i was on my third year, it was timely to meet Dr. Margarita Lavides who is an expert in marine science and fisheries. Because of her, I ended up doing a marine-related thesis. This started my journey into the depths of the underwater world.”

For Erina, it is important that Filipino citizens continue to educate ourselves about the interconnectedness between man and nature, explore the richness our country has to offer—to reconnect with nature, to take action and become a conscious consumer, spread our awareness, and lastly, become a hero for our environment. We must continue to save the ecosystem that keeps us alive.

Today is National Heroes Day, and as we celebrate our heroes in history who have defended our country, we also shed light on our modern heroes who are currently rescuing our natural resources.

These two Filipinas are forces of change in our society, who continues to inspire citizens to become aware of the dangers that our environment is facing.

And that, for Preen.ph, is a true hero.

Related stories:
Maria Clara is not always the best definition of Filipinas
These Filipino heroines showed that women stood their own in the battlefield
Are Filipinas truly free in 2019?
Queer heroes have always existed, and it’s time we recognize them