Dear NASA, we can’t believe you cancelled the female spacewalk 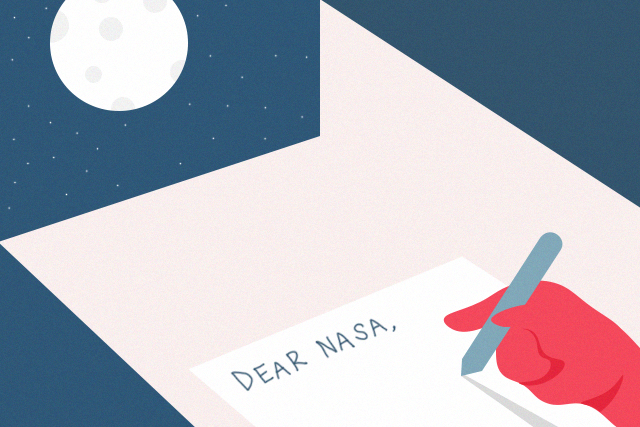 My best friend Katie and I used to stare at the moon every night when we were little girls and promised each other that one day we would go to the moon. Katie went on to study engineering, and I graduated from college with a degree in physics, cum laude. I know it’s been a while since the last moonwalk, but at this point, I just want to explore the universe lightyears away from the earth. Don’t get me wrong, I like the world we live in, but with global warming and all that, maybe it’s time to see if there’s life out there. Or just to see what the stars look like up close. Katie feels the same way, too, though she’s just really fed up with the daily diet of inanity Fox News feeds her parents and wants to just be somewhere Donald Trump has never tainted. She figures the International Space Station might be a fresh, new destination—on our side, of course, not the Russians. But if push comes to shove, of course, she’ll cooperate with any joint operations if the future of the universe depends on it. And, to be honest, intermittent fasting and keto didn’t really work for her, so she’s kind of intrigued by those liquid packets astronauts eat.

Anyway, my question is this:  Katie and I have been training to be astronauts for the past three years, we’re the right height and weight, though a bit on the petite side, we both have 20/20 vision, and we’re balanced people—you know, calm, mentally stable, not prone to drama—even if we’re pretty badass women, so can two women go do the spacewalk together?

You and your best friend seem eminently qualified to be astronauts. We have had over the years many female astronauts who have done their country and the world proud, such as Sally Ride, for example, and Christa McAuliffe, to name two exceptional women. And the contributions of women to NASA have been significant. If you watched the movie Hidden Figures, you’d know just how crucial a role Katherine Johnson played in guiding John Glenn’s successful and historic re-entry into the earth’s atmosphere back in 1961.

So yes, Ms. Universe, we support the dreams of women who want to go out into space. We urge you to continue with your training, and we sincerely hope you can one day do the spacewalk together.

The only issue we foresee, however, is that our space uniforms were designed and made with men in mind. You know, like Neil Armstrong and company—bigger frames, larger armholes, longer pant lengths and all that. So we may not stock your size. And if we do, we’d probably only have one readily usable piece available, which would mean that you and Katie would have to decide who gets to go first on the spacewalk because we just don’t carry two of each size, readily usable, for women.

We hope you understand our position. The whole women in space thing still remains rather foreign to us 36 years after we sent Sally Ride. Not to mention 35 years since Kathryn D. Sullivan became the first woman astronaut to go on a spacewalk. We are trying, nevertheless.  We know that women want to look their best even at zero gravity, so we designed a space makeup kit complete with makeup remover, lipstick, blush, eyeliner and mascara, and packed it in a space-friendly bag. The media at one point referred to you ladies as “the Glamournauts” and those “eye-popping space gals.” And you women made it clear that you didn’t like that one bit.

We are moreover sensitive about your, er, female physiological concerns, and unlike the Republican state congressman in Maine who said women in prison should have very limited access to menstrual hygiene products such as tampons lest they feel that their time in jail is akin to being “a country club.” For we do take into consideration that you may be getting your period while in space, and we provide a very generous supply of tampons. If we may be so frank, we have absolutely no idea how those tampons would work while in space, and how you would even insert them, but because you would like to do the spacewalk together with your friend, and we’ve heard that women who are very close tend to have synchronized periods, we will make sure that there are more than enough tampons for both of you.

READ MORE: Access to menstrual hygiene products is a basic right, not a luxury

Not that being in space, isolated from everyone else on earth, for months at a time, is anything like prison, but in some ways, it is better than a country club. Where else can you enjoy unparalleled, breathtaking views of the earth? Where else can you float, suspended mid-air, undisturbed by cell phones ringing or the babble of voices around you? It’s like yoga, but in an other-worldly dimension.

We are sorry we could not be more helpful but we urge you to never give up on your dreams of becoming female astronauts.

We are astronauts, period.

You may have almost shattered that presidential glass ceiling, and actually, you did, since you won the popular vote, after all. However, it would appear from NASA’s response, that there is a black hole where NASA’s common sense should be.

I would very much appreciate your take on this.

Related stories:
Meet the 17-year-old teen who’s set to conquer space
Who knew Mars rover Opportunity would hurt people’s hearts this much?
Japanese whisky distillery to send samples to space
Love during Venus in retrograde: Is it as bad as it seems?

Next
Step back, red velvet cupcakes: Cookies are back to outshine you