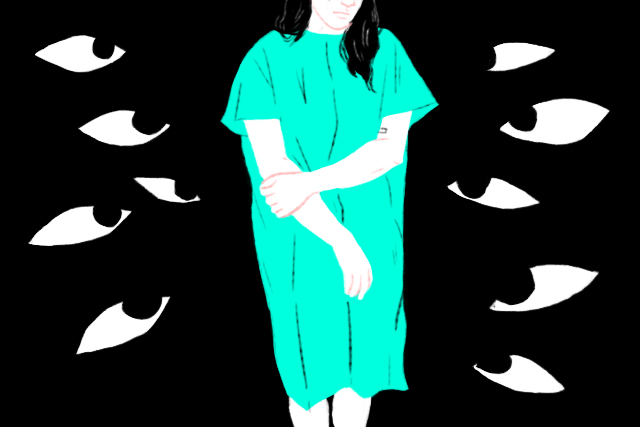 A funny thing happened at a state legislature recently. A female legislator, a Democrat, responding to HB481, a bill that passed the Georgia House of Representatives by a mere two votes—the “heartbeat bill” essentially bans abortion as soon as a heartbeat is detected in the womb, or as early as six weeks—drafted her own “testicular bill of rights.”

Her intent, of course, was to highlight the utter ridiculousness, not to mention outright misogyny, of the continuous efforts of government (and men) to control a woman’s uterus and her right to choose, and even her right of access to contraception. If the tables were turned, would men agree that the government—as well as other men and women—had the right to decide what their testicles could and couldn’t do? The testicles being the sperm factory, producing the millions of sperm of which one is only necessary to fertilize and egg and form an embryo.

READ MORE: The 11-year-old rape victim from Argentina who asked for an abortion should have gotten it

Since the majority of women who seek abortions have usually fallen pregnant via the tried and tested method of sexual intercourse, shouldn’t men’s ability to contribute to conception also be regulated? Why should women be forced to proceed with a pregnancy they may not want for whatever reasons—and they are almost always not frivolous reasons—while men face no consequences for spilling their seed?

I mean, why not, right?  Because, hey, you want to regulate bodies and choice? Make it apply to everyone across the board, both the sperm producers and the ovary bearers!

Kendrick knows her “testicular bill of rights” has no chance of passing, but that’s not her point. The “heartbeat bill” is clearly unconstitutional, and she wants to bring attention to the relentless efforts by government (generally male-dominated) to ignore “the fundamental right of women to choose their life and destiny by making choices about their bodies and when to start a family.”

Basically her draft legislation takes the piss out of the “heartbeat bill” and says, well, what’s good for the goose is good for the gander, so why don’t we tell men what they can do with their d*cks? She told Rolling Stone that she wanted to “bring awareness to the fact that if you’re going to legislate our bodies, then we have every right to propose legislation to regulate yours,”

Speaking to CBS News, she said, “HB-481 [The ‘Heartbeat Bill’] inspired me to see what the reaction would be from some males and male legislators if the tables were turned and we started to talk about their reproductive rights and organs. It has started the conversation about the absurdity of regulating women’s bodies and right to choice and instead focused on men and their rights.”

READ MORE: Why The Handmaid’s Tale is the anti-womanseries you need to see right now

Georgia is not the first state—nor is the United States the first country—to attempt to criminalize abortions. A Texas state representative, Tony Tinderholt, proposed a bill a few years back that would criminalize abortions, his reasoning being that it would make women “more personally responsible” for their sexual behavior. He’s a Republican, in case you were wondering.

Vicki Larson, writing in Medium, was not having any of this bullsh*t. “I know I am not the only woman who says, enough. I am so tired of men telling me what I can and can’t do with my own body — especially since no one is requiring anything even remotely similar for men. Don’t they need to be “more personally responsible” for their sexual behavior, Rep. Tinderholt? (Who has been married five times, had one wife get a restraining order against and who admitted marrying once ‘for insurance reasons;’ yeah, he sure can tell us how to be ‘responsible’).”

Lest we think we are more enlightened here in the Philippines, remember that in a country where divorce is still not allowed, where abortion is still illegal, and where women’s access to birth control and sexual health education is still restricted, despite the Reproductive Health Law having been passed mandating exactly these, women are held to a different standard than men when it comes to sexual matters. Women who are raped are still blamed for “asking for it” because of what she wore, what she drank, and what she might have said, even if that might have included the word “no” uttered several times. Women who become pregnant outside of marriage are still often vilified for their carelessness, while men are rarely held to account at all. And how dare a woman publicly identify her rapist?  Does she care that she is ruining a man’s life and reputation?

Why don’t we start caring a bit more about women and their welfare instead?

Related stories:
The 11-year-old rape victim from Argentina who asked for an abortion should have gotten it
Where do Tito Sotto and Loren Legarda get off defunding the RH Bill?
The impact of Argentina and Ireland decriminalizing abortion
The Church isn’t happy with Pres. Duterte’s move to strengthen RH Bill

Next
Preen tips on making sure you don’t burn out