R. Kelly thought he can get away by throwing tantrums, but predators should be held accountable 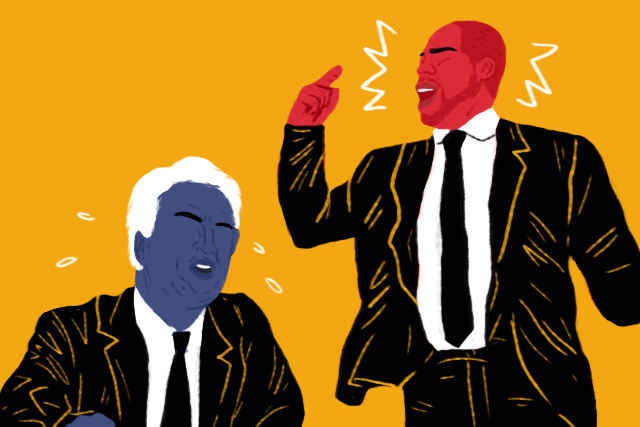 So R. Kelly took a page from Brett Kavanaugh’s playbook and did his own version of “I Love Beer.” Asked about the accusations against him in a TV interview with Gayle King, he went full-on “how dare you”: indignant, emotional, hysterical, ballistic, unhinged. In short, he acted the way a woman is often accused of—and discredited for—acting. When a woman plays the emotional card, she is dismissed for clouding reason with histrionics, and therefore what she has to say has no merit. When a man employs the same tactics, he is applauded for being sincere and truthful. And he is regarded as the victim, whose reputation is so besmirched, and whose life is so ruined, by baseless and irresponsible allegations.

The script is so familiar, it’s nauseating.

Then he proceeded to stand up and look at the camera, feral, angry, posturing—like the beast that he was.

“I believe I can lie,” must have been the tune running through his mind, Jimmy Kimmel commented.

READ MORE: Why did it take so long for people to take the R. Kelly controversies seriously

Kavanaugh and Kelly, they’re cut from the same mold. Privileged, wealthy men who’ve gotten away with so much throughout their lives now being held to account. And yet their first reaction is, “How dare you?” Which already indicates that their strategy—always an ill-advised one, yet men seem to be convinced is effective—is through lie the sh*t out of the situation and blame someone else, because self-righteous indignation is the province of the men whose reputations are under siege. They sputter, they deflect, they cry, they beat their chests in rage. But they’re not saying sorry. They’re not admitting any mistakes. They’re not showing any remorse. They’re not conceding even the remotest possibility that they may have forced themselves upon women as young as 13, that they might have dispensed with the notion of consent altogether when they decided they wanted to have sex with a particular woman. Or underage girls. Or underage boys, in the case of Michael Jackson. His premature death may have fortuitously spared him from fully facing the music, but fortunately we now have Leaving Neverland from HBO to reveal the horrific nightmare that was the faux utopia the pop star built.

READ MORE: Why Leaving Neverland is a must-watch for Michael Jackson fans

Kavanaugh and Kelly, they know that their past will always come back to haunt them. Kavanaugh may have been rewarded with a seat at the Supreme Court, and Kelly may think he can rail and lawyer his way out of jail, but their emotional outbursts are acts of desperation, their tear-soaked rants the pathetic squeals of the patriarchy in its death throes. They know the times, to quote Bob Dylan, they are a-changing, but while they can still get away with it, they’re damn well going to keep on trying.

This attitude was never more evident than in the way Kelly was talking down at Gayle King during the interview. His stance was one of pure arrogance masquerading as victimhood. Considering that in February, Kelly was charged with 10 counts of sexual abuse, including nine against three victims aged between 13 and 17, Laura Snapes, writing in The Guardian noted, “The TV interview was the singer’s chance to refute the sexual abuse claims. But an angry man towering over a seated woman is never a good look.”

There’s an iconic photo by Lazarus Jean-Baptiste from that interview that perfectly captures the deceptively shifting power dynamic between men and women in the age of #MeToo and #TimesUp.

As Snapes described it, “In the throes of denying the charges and numerous other, similar allegations, Kelly stands in the right-hand third of the frame, wrathful, shouting, pointing into the studio lights, as undone as the dismantled coffee cup at his feet. Standing slightly towards the back of the shot, he almost appears to be levitating with the force of his anger. On the left, King remains sitting, staring forward, as calm and still in the face of Kelly’s performance as the bottle of water by her chair. While the image’s proportions are perfectly in line with Renaissance composition, Jean-Baptiste’s undeniably artful shot seems drawn from a more prosaic school: its depiction of male power and aggression is so textbook, it could come straight out of a stock imagery catalogue.

“Kelly’s demeanour is revealing: if this is the manner in which he proclaims his innocence—screaming, weeping, pointing aggressively—in a media setting, then how might he wield his power in the private settings detailed by many of his alleged victims, in which they say he makes them call him ‘daddy’ and ask for permission to use the toilet?”

Indeed, King may have been the picture of calm as she watched him have his tantrum on TV, but it was clear she wasn’t buying any of his nonsense. At one point in the interview, she simply says to him, “Robert.” Like, boy, you done now? Because you can throw as many hissy fits as you want, but this interview ends when I say it ends. And 50 women and counting can’t be wrong when they allege similar experiences of abuse throughout an extended period of time.

READ MORE: The viral photo of Gayle King and R. Kelly is much more significant than you think

Like Kavanaugh with Christine Blasey Ford, Kelly thought Gayle King would be intimidated by his rage. If anything, the fact that he believed his display of anger would exonerate him did not work in his favor: if he was capable of being so easily enraged, then it wasn’t a stretch to imagine him using this same display of intimidation, to get girls as young as 13 to do his bidding, sexually and otherwise.

With typical arrogance, he didn’t learn from his failed histrionics in the first part of the interview and continued to frame himself as someone who is constantly victimized because of his wealth and celebrity status. People have been stealing from him, he claimed, which is why he hasn’t kept up with child support payments.

I don’t know if that’s true or not; the two women spoke out in his defense. But that still doesn’t stop me from thinking of him as a predator. And call me cold-hearted—and I’m echoing Michael Arcenaux’s sentiments in Elle.com here—but I can’t feel any pity for a predator.

Related stories:
The viral photo of Gayle King and R. Kelly is much more significant than you think
Why Leaving Neverland is a must-watch for Michael Jackson fans
R. Kelly may finally be convicted, thanks to alleged new evidence
Why did it take so long for people to take the R. Kelly controversies seriously

Previous
Another alleged R. Kelly sex tape was surrendered to the police

Next
6 simples steps to stay healthy at work