To all the women who refuse to be intimidated 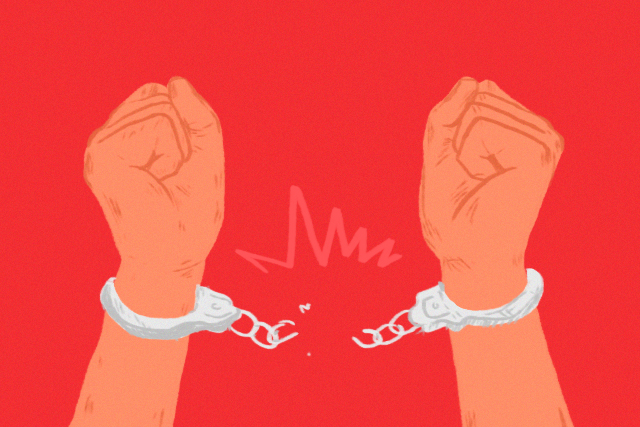 Talk about the threat of a woman. What is it about strong, independent and fearless women—the genuine ones, not the faux feminists who play coy and say boys will be boys—that has the Duterte administration’s panties in a twist?

It’s quite remarkable that men who craft their personas around the myth of machismo are so threatened by women who see through their bullsh*t. And yet so fragile is their masculinity and so myopic is their outlook that they think bullying, threatening, manufacturing criminal charges, slapping a lawsuit or arresting such women would be intimidating enough to silence them.

Leila de Lima, Lourdes Sereno, and now Maria Ressa. Notice a pattern here? Whether such women irk you or impress you (or both, simultaneously), you’d have to admit that they’ve got some major balls on them for standing up to thugs pretending to be following the law and the principles of democracy while brandishing guns and approximating a swagger they believe is intimidating.

Maria Ressa’s arrest is an absolute outrage. For the chilling message it sends to journalists in the Philippines who seek to present fair and balanced reporting. For the blatant and unwarranted abuse of presidential power. For the shameless fabrication of a charge based on a law that hadn’t even come into effect when the alleged crime of cyber libel was committed. For the unapologetic harassment of a woman in the misguided belief that she, by virtue of a woman, would be so easily cowed.

Not that male journalists are easily cowed. News reports have covered how male journalists—print and radio—have been shot in cold blood after having incensed some provincial warlord or mayor. And let’s not forget the gruesome 2009 Maguindanao massacre in Mindanao in which 32 journalists were mutilated and beheaded as they went to Ampatuan town to cover the filing of the certificate of candidacy of a political rival of the Ampatuan clan.

But Maria Ressa’s arrest follows a pattern nauseatingly familiar under the Duterte administration. Strong, defiant woman who dare to question government policy or expose corruption in high places are pelted with insults, or harassed with lawsuits, or slut-shamed, as in the case of Leila de Lima, who remains in jail without charges to this day and is not allowed to post bail. I am almost certain that innuendos about Ressa’s private life will soon start circulating, backed up by sloppily doctored videos and violent online threats in poor English or crass Filipino.

And yet what these nitwits don’t seem to understand is that the more you try to intimidate formidable women of Ressa’s ilk, the more determined they are to stand their ground. As Ressa stated clearly upon her release on bail: “Someone told our reporter last night, be silent or you’re next. I am appealing to you not to be silent, even if, and especially if you’re next. You have to express outrage as you’re doing now.”

If you’re such a threat to the powers-that-be, you must be doing something right. Just as Alexandria Ocasio-Cortez.

The freshman Democrat congresswoman outplays any conservative who tries to put her down every single time. She is social media-savvy in a way her Republican detractors will never be able to master, and she can handle any insult you lob at her. When she claps back at a pathetically cobbled remark meant to portray her as naïve or stupid or worse, inauthentic, she does it with breathtaking skill. No one, but no one, can beat her at her Twitter game. An old Republican shill like Peggy Noonan should have known better than to even try.

During the state of the union address last week, Noonan tweeted such a pointless and irreverent jibe about AOC’s demeanor, saying, “AOC had a rare bad night, looking not spirited, warm and original as usual but sullen, teenaged and at a loss.”

Seriously, Peggy, are you really that clueless? What was the point of such a comment? She took a dig at AOC’s age and character, as if she were so badly behaved for not standing and applauding Trump’s outright lies and fear-mongering nonsense. Her comment also had a racist and sexist subtext: as a woman, AOC should have conformed and feigned enthusiasm, because that’s what women do: shut up and smile. And as a Latina, why was she not in fiesta mode?

Of course AOC tweeted the perfect retort: “Why should I be ‘spirited and warm’ for this embarrassment of a #SOTU? Tonight was an unsettling night for our country. The president failed to offer any plan, any vision at all, for our future. We’re flying without a pilot. And I’m not here to comfort anyone about that fact.”

Why, indeed? That passive-aggressive form of bullying was ridiculous, and, fortunately, ineffective. The blatant aggression AOC’s other fearless colleague, Congresswoman Ilhan Omar, has been subjected to is equally unwarranted and ultimately pathetic. During the recent House Foreign Affairs Committee hearing on Venezuela, Omar was especially impressive in the way she refused to be silenced by special envoy to Venezuela Elliot Abrams, a discredited former government official in the Reagan administration who had pleaded guilty to withholding information from Congress during the Iran-Contra affair hearings in 1991.

Obviously underestimating the newbie congresswoman, who happens to be American of Palestinian descent and a hijab-wearing Muslim to boot, Abrams rudely interrupted her several times, demanding to respond to what he perceived was an unfair attack on him. But Ilhan stood her ground and reminded Abrams—the very epitome of white male privilege—that “It wasn’t a question.”

As Vox reported, “Abrams reacts angrily to this response, and only gets angrier from there. Omar pushes Abrams on Reagan-era policies in places like El Salvador and Nicaragua, and he flatly refuses to answer. Instead, he angrily dismisses the entire line of questioning as a ‘personal attack.’”

Which, when translated from fragile masculinity-speak, meant, “How dare you attack my credibility, who do you think you are to try to make me accountable for my past actions?”

How like an entitled, threatened male to say such a thing.

Bravo to all the women who refuse to be intimidated.

Related stories:
We’re triggered by Maria Ressa’s arrest
What Time 100 critics have to say about Pres. Duterte and Sen. De Lima
Maria Ressa named Time 2018 Person of the Year for fighting the “War on Truth”
These Filipino heroines showed that women stood their own in the battlefield

Next
A rundown of social commentary during NYFW fall 2019