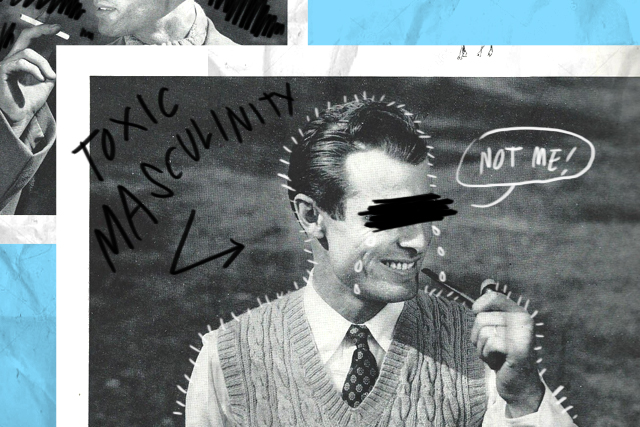 A men’s personal care company releases an ad targeted at their customers at how to be a man in 2019—you know, basic human decency stuff—and surprise, surprise, there are actually a significant number of men (typically right-wing) who are batsh*t furious that they’re being told how to behave and railing at the standards of behavior being imposed at them and blame the #MeToo movement for this new assault and insult to their manhood.

Now, now all you prickly pricks, calm down.

Hissy fits all over now? Okay, take a seat and listen.

The Gillette ad resonates with and infuriates many men because there is a need for men to examine their behavior and how it impacts everyone—men, women, and children, young and elderly, straight and queer. So much of the violence women, children, and the LGBTQ+ community are subjected to is perpetrated by men, fueled, it has been posited, by the toxic impositions of masculinity as it is traditionally defined and imparted through socialization and education.

And the model of toxic masculinity is passed on from man to boy to father to son to uncle to nephew ad infinitum. Men learn to be men according to what they see and hear in their daily lives. They mimic the behavior of other men: angry fathers usually pass on their rage to their sons, who then internalize it with their own families; men who treat women with scant respect tend to raise sons who demonstrate the same lack of regard for women. By the same token, men who are feminist in their views, who treat women as equals, are more likely to impart those same values to their boys.

The Gillette ad was not intended as a scolding. It wasn’t meant to call out men for being assholes. Instead, it tried to show men that there was another way to be that didn’t involve bullying and harassing and violence. And that men should be encouraging other men to be better, because the best way to teach this is through example.

And yet many men think it’s anti-men. It’s not. It’s anti-toxic masculinity. Why there are men that don’t seem to understand that is puzzling. Instead, they take great offence at being lumped together with the bullies, harassers, and sexual abusers. How many men have said, “How dare Gillette? I’m not like that!”

But Gillette isn’t saying they’re like that. Gillette is saying, call out men who are like that. Don’t tolerate that behavior in others because it’s wrong and ultimately destructive. To be a man is to no longer accept it when other men are behaving badly. To be a man means no longer excusing toxic behavior by saying “boys will be boys.” To be a man now means accountability.

As The Conversation noted, “Gillette’s new ad—‘The best men can be,’ which plays on the razor brand’s long-held motto, ‘The best a man can get’—is powerful and emotional, a carefully-spun narrative about the role models young boys see in their daily lives. It tackles bullying, sexual harassment, inequality in the workplace, and sexism on screen, by promoting courage, humility, responsibility, and kindness. It says all of these behaviors make up that complicated construct, ‘masculinity.’ And it challenges viewers to question what sort of behavior defines manliness.

“The mutiny against Gillette’s ad reinforces why we need movements like #MeToo and shows how painfully little distance we as a society have covered since it began. In the wake of various high-profile allegations, #MeToo called out unsavoury behaviour that was somehow condoned by society—behaviour that increasingly comes under the umbrella of ‘toxic masculinity.’ Yet Gillette’s ad, which recognizes this drive for change and wants to take positive action, has been met by a major backlash.”

But then, isn’t it a sign of male entitlement to actually feel that masculinity is under attack with this ad and the #MeToo climate in general?

As I’ve said before, it’s not enough for a man to feel unfairly judged and say in protest, “But I’m not a rapist (or sexual harasser or assaulter).” R. Kelly certainly didn’t seem to think he’s a rapist. Yet many men chose to look the other way rather than call him out. As Mary Pipher wrote in Reviving Ophelia: Saving the Selves of Adolescent Girls, “Young men need to be socialized in such a way that rape is as unthinkable to them as cannibalism.”

Idris Elba probably put it best when he said the #MeToo movement is “only difficult if you’re a man with something to hide.”

If a man doth protest too much, he may indeed be hiding something, or he may just be abysmally clueless and inordinately full of himself, a frightful combination. Take Matt Walsh, for example, of the conservative Daily Wire, who guested on Fox & Friends recently. He ranted about already knowing not to do any of those things shown in the Gilette commercial. He even said he learned nothing from the #MeToo movement because he already knew not to rape or harass or assault. As he spoke he became more enraged, in effect saying to Gillette and any would-be crusaders against toxic masculinity, how dare you tell me what to do?

His anger and defensiveness only proved how deeply ingrained and toxic his own sense of masculinity was. Commenting on his behavior, John Iadarola on The Damage Report said, “You know how a reasonable person responds to being told not to do something they already know not to do? They say, ‘Yeah, I won’t’” and not get all defensive.

Iadarola went on to say that Walsh’s appearance on Fox & Friends illustrated just how much the conversation sparked by the Gillette ad was so necessary, for in the next breath Walsh just proved how utterly clueless and sexist he was when he said, “Most men don’t need that message. You’re not going to find an advertisement like that directed at women… that shows women gossiping and nagging their husbands and shopping too much and then says, ‘but some women know the right way to act,’ with those women having an epiphany and they realize they’re not supposed to do those things.”

Sexist, much? How can one even equate “nagging” with toxic masculinity?

Stop being a prick and start being a man. The accountable kind, not the toxic kind.

Related stories:
This woke ad had the worst comments from male viewers
Men like Donald J. Trump need to give up toxic and fragile masculinity
#WithoutWomenMenWould: The hashtag where women joked and men got offended
How this campaign broke their outdated views of masculinity

Previous
Filipino brands to watch in 2019 according to ‘Forbes’

Next
The Women’s March lives on despite controversies