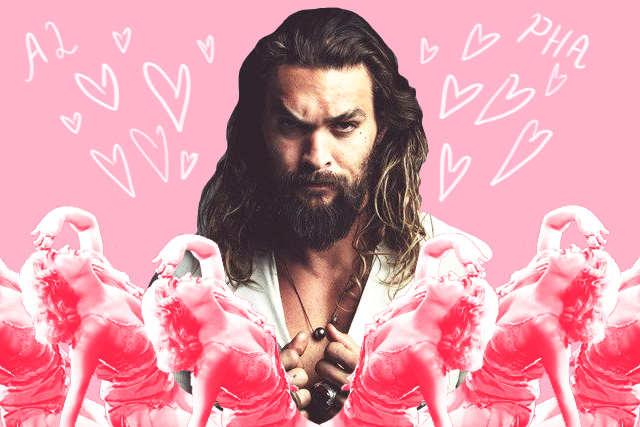 All some women want for Christmas is… Jason Momoa.

Talk about archetypes. The Aquaman star, who apparently first got the loins of ladies everywhere quivering when he played Khal Drogo on Game of Thrones, embodies the alpha male at his most primal. Indeed, there is a Neanderthal quality to Jason Momoa, a Tarzan-like appeal that gets women swooning. Long hair? Check. Beard and moustache? Check. Broad shoulders? Check. Bulging biceps, Check. Raw, unbridled strength? Check? The ability to protect and rescue women from danger—or at least the appearance of it? Check. Good in bed? Let’s hope so.

Some would say the return of the alpha male also heralds the return of manliness in its most natural – hirsute and muscular as opposed to well-groomed metrosexual—form. After all, the concept of the alpha male came from observing hierarchies in the animal kingdom, particularly among primates. According to a New York Magazine piece by Jesse Singal, “The alpha chimp and the silverback gorilla, physically imposing as they often are (alpha chimps have been known to rip tree stumps out of the ground in terrifying displays of dominance), have come to symbolize in the public imagination a natural order that favors a single dominant male ‘winner.’”

If you’ve seen Jason Momoa, you’d have no doubt at all that he could rip a tree stump off the ground or, as my daughter put it, “fling someone across the room at high velocity,” as he seems to have done in Aquaman (I haven’t seen the movie yet).

The term “alpha male” always involves a level of dominance. As Singal wrote, “Alphas get their way because they know how to, because they know to not back down. To butcher the old expression, women respond to alphas’ strength by wanting them, men respond to it by wanting to be them. But a liaison, relationship, or friendship is only going to occur on the alpha’s terms: He has neither the inclination to compromise, nor any need to, since he can always get—let’s be honest, take—what he wants. Alphas offer few wasted words—you won’t see them sputtering some nonsense about their feelings, or begging others to like them. To the outside observer, everything comes easily to them.”

Interestingly, Momoa’s own wife, Lisa Bonet, describes him a little differently. In an interview with Porter, she said, “What’s cool about Jason is that he’s an alpha male who stands for love and family. And to circle back to my own wounds, having an absent father, then to be fully met by a man of that stature, is really incredible. Jason embodies a rare form of masculinity in this day and age—he’s a leader; he’s generous. Just in terms of charisma, physique, the right use of power, responsibility, work ethic, you can go down the line.”

Even more interestingly, when they met, Jason borrowed a page from the Tarzan playbook and “basically picked me up and threw me over his shoulder, caveman style!”

It’s not difficult to understand the appeal of an alpha male type like Jason Momoa. In these rather turbulent times, women, consciously or not, are drawn to men they feel will offer protection and solve all their problems. They respond to the display of hypermasculinity, while at the same time believing in their bones that this same “brute” would be tender and gentle if the circumstances called for that behavior.

In short, women want the he-man who’s also a good guy. Clearly, Lisa Bonet seems to have found this combination in her husband.  Having met Jason Momoa myself recently—it surprised me how many women I knew of various ages declared themselves to be infatuated with him—he did seem quite gentle and kind, even funny. So I got why women found him so hot.

It reminded me of one night in Paris with my friends, playing Spin the Bottle. At their turn, everyone had to answer the question, what is your ultimate sex fantasy? When the bottle pointed to my hyperfeminine homosexual friend, he of the flawless skin and geisha charm, he answered, “to be held in the arms of a strong man who loves me.”

We were rather startled by his reply, as he often loved to regale us with tales of his many wild sexual escapades. We had all expected a raunchy, X-rated fantasy, not a romantic yearning for Prince Charming. But I suppose that explains the enduring appeal of the alpha male—is that all we want after all, someone we can count on to take care of us?

And, presumably, someone who’ll throw us over his shoulder, carry us up the stairs, fling us down on the bed and ravish us. For isn’t that part of the fantasy? That the dominant male is also the man who f*cks the best?

Related Stories:
Aquaman rundown with notes from Jason Momoa and Amber Heard
How this campaign broke their outdated views of masculinity
Nancy Pelosi: The woman who elegantly took down Trump
Can you tell these celebrity mothers and daughters apart?

Next
Start making pots of hot chocolate to celebrate Christmas