Nancy Pelosi: The woman who elegantly took down Trump 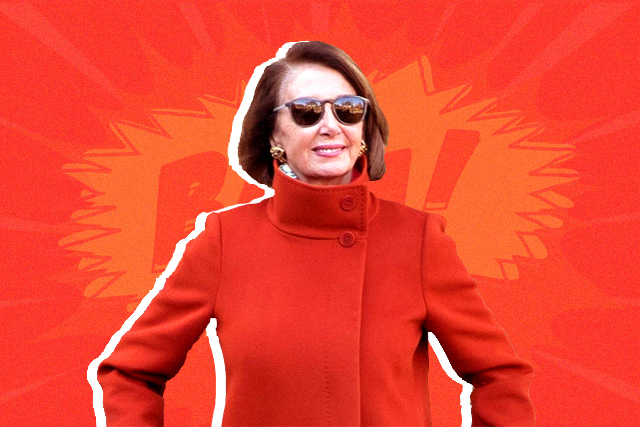 Nancy Pelosi, you are one motherf*cking badass.

Once again, it took a woman to show the world that in a room full of men, the only person with balls was female. And it happened calmly, without hysteria or histrionics on Nancy Pelosi’s part. She didn’t need to raise her voice or flap her hands about frantically. She merely established her dominance with such mastery, parrying Trump’s rubbery untruths with perfectly placed disses. She knew she was smarter, stronger and subtler than the idiot(s) before her and deftly maneuvered, together with her colleague, Sen. Chuck Schumer, the on-cam meeting at the Oval Office with Tweedledum Trump and his Tweedletwit vice-president Mike Pence, to her advantage.

One major takeaway from what looked like a reality TV episode was that Nancy Pelosi acted like the experienced mother (and grandmother) she was—sensible, measured but with zero tolerance for bullsh*t and drama. Especially when the bullsh*t and drama was coming from someone with the IQ of a cardboard and the petulance of a toddler, not to mention the over-inflated privileged ego of a mediocre white man.

Trump, quite simply, was outplayed, outmatched and outwitted by someone far superior, someone who wouldn’t—and couldn’t—be cowed into the groveling submission that has defined the current crop of men without balls and backbones, i.e., the Republican Party. For every attempt of Trump to patronize, condescend, interrupt and mansplain, Nancy Pelosi struck it down with consummate grace and expert disses: all she had to do was state the facts.

Trump obviously went into that meeting believing he had the upper hand—and the press would be there to capture his mastery of the media. He thought he would show Pelosi and Schumer who was the boss, and he would extract the $5 billion he wanted for his pathetic wall and avert a government shutdown. But Pelosi wasn’t having any of it. She already knew all that and wasn’t going to fall for any of his sophomoric tricks. In fact, the coup de grace, delivered with the assistance of Schumer, was getting Trump to say that he would force the shutdown—and take responsibility for it.

“I am proud to shut down the government for border security,” he said. Spoken like a true idiot.

As anyone who follows politics knows, whoever causes the shutdown tends to pay the political price for it. And Pelosi made sure that should the shutdown indeed happen, it would be known as the Trump shutdown.

And as anyone who has typed in “idiot” into Google images search knows, Trump is the ultimate idiot—and an amateur to boot.

Nancy Pelosi has been widely—and wildly—applauded for basically having Trump for breakfast and spitting him out. Nothing proved that more than the image of her strolling out of the White House with her sunglasses on, impeccably dressed in her chic rust-red MaxMara coat. And she was smiling. Like a goddamn boss.

Yes, she was fierce. Yes, she was a badass. And yes, she f*cking deserves to be the next Speaker of the House. But much more than that, she recognized his pathetic, fragile masculinity and how building the wall was tied to that.  And she knew how to put him in his place.

When he said, “Nancy’s in a situation where it’s not easy for her to talk right now,” implying that her becoming the next Speaker of the House was a tenuous possibility at best, she shot back, calmly and firmly: “Please don’t characterize the strength that I bring to this meeting as the leader of the House Democrats, who just won a big victory.”

At a private meeting with House Democrats after the Oval Office, she reportedly said of Trump and his wall: “It’s like a manhood thing with him—as if manhood can be associated with him,”

With that sentence, she destroyed Trump, the leader who likes to think of himself as the ne plus ultra of the male species. He actually believes himself to be the handsomest, smartest, richest and manliest man out there. But all that bluster really just hides what he really is: an insecure man with no balls.

And just for good measure, she also said, like the wise grandmother she truly is: “It goes to show you: You get into a tinkle contest with a skunk, you get tinkle all over you.”

I mean, she turned the Oval Office shutdown meeting into an Aesop fable! The woman is a f*cking Jedi, ninja, and Mr. Miyagi all rolled into one, who delivers her zingers with the precision of a sniper. And on top of everything, she looks damn elegant doing it.

Trump was an absolute idiot to underestimate her, thinking she could be intimidated into agreeing to fund his unerected wall, an apt metaphor if there ever were one, for his masculine inadequacies.

How many women have walked into meetings and conferences, televised or not, ready to have a rational, factual discussion, only to be underestimated by the men in the room who hope to intimidate them, or worse, conduct business over their heads, as if they weren’t there?  It happens all the time. It’s so typical of men with fragile egos to want to dominate and yet they do it with a total lack of subtlety.

Sadly, most men tend to get away with such behavior. But thank goodness Nancy Pelosi is here to show all of us women how you put a man in his place.

And not just Nancy Pelosi. Other women are brilliant at the art of the putdown. Like her colleague in the House, Rep. Zoe Lofgren, a Democrat from California, who posed so artlessly but devastatingly a question to the CEO of Google during this week’s U.S. House Judiciary Inquiry into the Internet behemoth’s alleged bias against conservatives.

She asked in a calm voice, “If you Google the word ‘idiot’ under images, a picture of Donald Trump comes up. How would that happen? How does search work so that that would occur?”

I’ve no doubt Rep. Lofgren knows exactly how Google search works. But she just had to ask the question and bring home the point that Trump is, in fact, an idiot. And a f*cking moron, too.

You can ask his former Secretary of State Rex Tillerson. Or just Google “f*cking moron,” “fragile masculinity,” or even “a manhood thing” and see what comes up.

Related Stories:
Why do some men overcompensate for their lack of ability to rule?
Men like Donald J. Trump need to give up toxic and fragile masculinity
Gigi & Bella Hadid, Rihanna, and Selena Gomez go #NoBanNoWall
Get to know the 46 women changing the world

Next
Miss USA is sorry for her xenophobic remarks