Why the ‘Lean In’ movement is not working 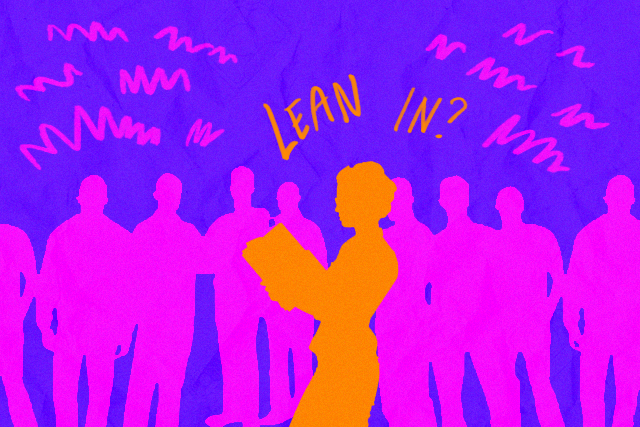 There seems to be an unspoken rule that women should all be supportive of each other, cheering each other on in their efforts to “have it all”—a great career, a happy family life, a successful marriage. So when a successful woman like Sheryl Sandberg says that the secret to a balanced life is learning to “lean in,” women all over the world nod in unison at what suddenly seems like revelatory wisdom, feeling empowered and ready to take on the corporate world by modifying their behavior and taking charge of their lives.

In her 2013 book entitled Lean In: Women, Work, and the Will to Lead, Sandburg encouraged women to seize opportunities during their careers and not limit themselves. The term “lean in,” as Grammarist put it, takes as its metaphor “a woman at a business meeting leaning in and engaging with the challenges being put forth, not leaning back and disengaging.

Lean In was touted as a “feminist manifesto” and Sandberg hesitantly and modestly became the new guru of a new movement of sorts, with women everywhere forming Lean In communities (on Facebook, of course) and local Lean In circles, a kind of support group that focused on advancing women in various aspects of work life. “We help women achieve their ambitions and work to create an equal world,” states the Lean In website.

Following the gospel according to Sandberg, women were encouraged to be more assertive, to reach for positions of leadership, negotiate “like a man;” to lead, not follow. “If you lean forward,” she has said, “you will get yourself into a position where the organization you’re with values you a lot and is therefore willing to be more flexible. Or you’ll get promoted and then you’ll get paid more and you’ll be able to afford better child care.” You should “believe you have the skills to do anything” and “have the ambition to lead,” and then you will “change the world” for women. “We get closer to the goal of true equality with every single one of you who leans in.”

It short, her prescription focused on how a woman could effect changes in the workplace for herself, while blending into the corporate environment of the company for which she worked—an individualistic, rather than systemic, approach that was as much criticized as it was embraced. For all its talk about women transitioning into leaders instead of remaining followers, Sandberg was accused of encouraging women to be assertive, but not to the point of rocking the boat too much.

Sandberg liked to think of herself as a feminist, but it would appear that her brand of feminism was fashioned just so in order to be palatable to the white men in power who still controlled the corporate world. The Pulitzer Prize-winning journalist Susan Faludi scathingly called this brand “Facebook feminism,” noting in an article for The Baffler that sign-ups to the Lean In community had to like the page on Facebook; this was also where Lean In acolytes conducted their discussions.

“What is she selling, after all, if not the product of the company she works for?” Faludi wrote. “Every time a woman signs up for Lean In, she’s made another conquest for Facebook. Facebook conquers women in more than one way. Nearly 60 percent of the people who do the daily labor on Facebook—maintaining their pages, posting their images, tagging their friends, driving the traffic—are female, and, unlike the old days of industrial textile manufacturing, they don’t even have to be paid or housed.”

Sandberg’s intentions were clearly well-meant, but just as clearly oblivious to other factors such as racial and structural realities that make the whole concept of Lean In easier for women of privilege to engage in, while those directly impacted by gender and institutional inequalities—women of color, for instance, struggle to have their voices heard.

It took the voice of reason to give the Lean In situation a reality check. Everyone’s favorite girlfriend and empowered woman Michelle Obama recently said of Lean In: “That sh*t doesn’t work all the time.”

And she’s right. “That whole ‘so you can have it all.’ Nope, not at the same time,” she told the crowd gathered at the Barclays Center in Brooklyn as part of her book tour.

It’s not surprising that Obama is among Lean In’s skeptics. She would know, first-hand, how difficult it is to have it all, even if it does seem to the rest of the world that she does have it all. So it’s easy to see how “liberating” her no-nonsense statement is for many women.

The problem with Sandberg’s approach—and let’s not forget her role as chief operating officer of Facebook in the current scandals involving the social media behemoth’s failure to act against Russian cyber-aggression particularly in connection with the 2016 presidential elections, and the company’s own underhanded methods in its attacks against George Soros—is its lack of authenticity. Jessica Stillman, writing on Inc.com, noted that “according to an even more vocal group of skeptics, the real trouble is that Sandberg’s approach implies it’s up to women alone to fix the problem of gender inequality. Companies don’t have to become more accommodating and less biased if all that’s needed for more women to rise is for them to change their behavior. Sandberg puts all the onus on women and none on institutions and society.”

Thank goodness Michelle isn’t buying any of that. Besides, I’d wager anytime that her memoir, Becoming, is a much better read than Lean In.

Related stories:
Not all women-led parties are feminist in nature
Music artist Kiran Gandhi talks about feminism the way everyone should
Pia Cayetano’s brand of feminism coddles the patriarchy
Ivy Park is a feminist brand but the production is anti-poor women

Previous
Pinay skateboarder gets spot on ‘Time’ Most Influential Teens

Next
It’s (almost) 2019, but we still have anti-progressive rape laws