All the dresses Priyanka Chopra wore on their epic wedding weekend 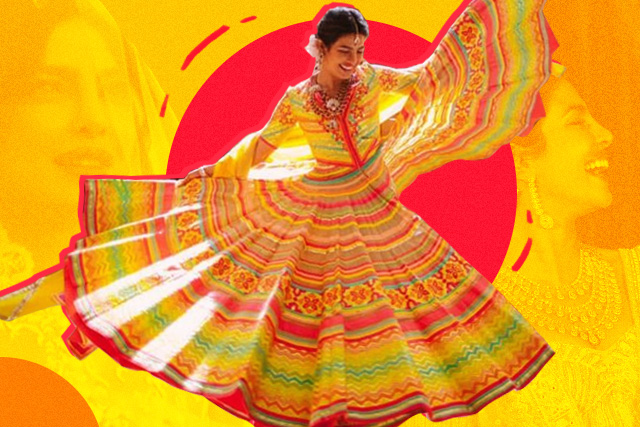 The photos of Priyanka Chopra and Nick Jonas’ wedding are finally here and it’s everything and more we imagined it to be. Unlike most wedding ceremonies, theirs took three days. That included traditional Indian pre-wedding ceremonies, as well as two official wedding ceremonies in honor of the couple’s individual cultures. I gotta say, they may not be royal but their wedding sure looked like it was one. It was extravagant and so over the top, and we’re completely living for it. Over the course of the weekend, Priyanka wore different outfits and each one was breathtaking. Seriously. Just when we thought we couldn’t be more awed, she delivers with yet another killer ensemble. We’ve compiled here her epic wedding weekend looks so you can see what we mean.

Gear up for the next big celebrity wedding that’s about to take over your feed! Priyanka Chopra (@priyankachopra) and Nick Jonas (@nickjonas) kick start the festivities with a puja at the Chopra residence in Manish Malhotra (@mmalhotraworld) looks.

Prior to the start of the official ceremonies, Priyanka was already serving looks. Attending the traditional Ganesh puja which according to Vogue was a series of pre-wedding rituals including an intimate prayer ceremony, Priyanka was seen wearing a sky blue suit covered with intricate cream and pink embellishments. She accessorized with statement sunglasses, shoulder-grazing earrings, and the Tiffany & Co. diamond ring that Nick proposed with.

For the first official ceremony as part of their wedding weekend, Priyanka wore a vibrant Abu Jani Sandeep Khosla gown. The designer shared on Instagram that the “fabulously folksy, multi-hued organdy ensemble” was “inspired by a vintage AJSK collection.” To complete the look, they teamed up with Abu Jani Sandeep Khosla for her jewelry. It was crafted by Saboo for AJSK BY SABOO, and is described as “an exceptional Heirloom piece of very fine rubies collected over generations.”

For the “musical evening” as Priyanka wrote on Instagram, she donned a sparkling sari from Abu Jani Sandeep Khosla. This time, the designer duo dressed her up with a subtle grey saree. According to India Today, it was fully hand-embroidered and intricately sequinned in gold and silver. She paired it up with an opulent choker with pear-shaped and marquise diamonds. Finally, she went with simple makeup and straight hair for a classy look.

Priyanka in her custom Ralph Lauren gown was a sight to behold. Her dress, which only took 1,826 hours to complete, was a full sleeve, hand-beaded and hand-embroidered dress with scalloped sleeves and a high collar. Plus a strapless column dress unerneath made of nearly 2.4 million mother-of-pearl sequins.

According to USA Today, “Hand-stitched into Chopra’s embroidery was a piece of her mother-in-law’s own lace wedding dress, as well as eight words and phrases meaningful to the bride: family, hope, compassion, love, “Nicholas Jerry Jonas,” “1st December 2018” (their wedding date), “Madhu & Ashok” (the names of her mother and father, and “Om Namah Shivay” (a Hindi mantra invoking Lord Shiva).”

Oh and she also wore a 75-foot veil. Not trying to say it’s better or more beautiful, but just so you understand how over-the-top and extravagant this is, here’s a comparison: Meghan Markle’s was 16-feet long.

For her second wedding ceremony, Priyanka looked regal yet again in a traditional red lehenga by Indian designer Sabyasachi Mukherjee.She told Hello Magazine, “I always knew I wanted a red traditional silhouette for my wedding but Sabya brought in incredible French embroidery to the mix and with incredible jewelry and western inspired veil it was just such an amalgamation of who I am!”

110 embroiderers from Kolkata, India reportedly took over 3,720 hours to craft this dress, which featured a veil, skirt and cropped top. And similar to her Ralph Lauren gown, Priyanka had the names of Nick and her parents embroidered in the waistband of her skirt.

Finally, the festivities concluded with a reception at the Durbar Hall in the Taj Palace Hotel in India’s capital city–a fitting regal venue much like their royal wedding location, which was the Umaid Bhawan Palace in Jodhpur.

Priyanka’s final look was a dreamy white lehenga, reportedly by Falguni Shane Peacock India. The full-on elaborate beading and embroidery of her outfit was complemented by the dangling diamond earrings and luxurious necklace she accessorised with. The flowers in her hair added a softer touch to the opulent ensemble.

Next
These scents will bring back Christmas memories