Celebrities imitating other celebrities is a winning look this Halloween 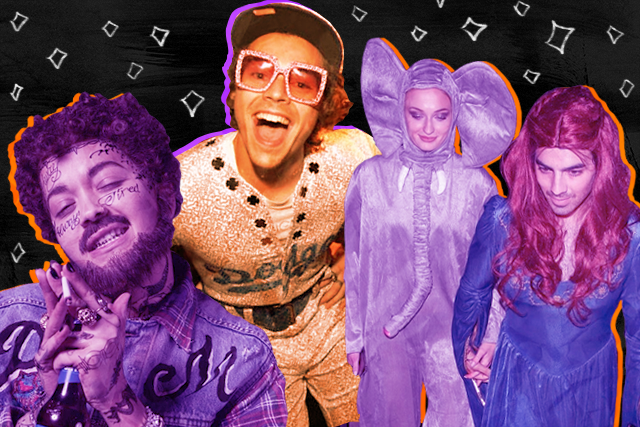 Halloween is here! Of course, we’re watching out for the best costumes. We love being surprised by the creativity of Halloween-goers—celebrities, particularly, ‘cause you just know they’re going all out and unafraid to be extra. Judging from our feeds, so far, we’re not disappointed. Noah Centineo’s Gaston costume, for instance, gets a thumbs up from us. Aside from fictional characters, it’s always fun to see how celebs pull of imitating real-life characters and fellow celebrities. Here are some that have caught our eyes.

They say couples who stay together eventually look alike, or in some cases, partner tends to dress like his/her SO. Joe Jonas took that to a whole ‘nother level when he dressed up like his fiancee Sophie Turner for Halloween. Well, not her exactly, but her most known role to date—Sansa Stark in Game of Thrones.

Sisters always borrow clothes, which usually ends in some kind of disagreement. For Halloween this year, Nicky Hilton borrowed her sister Paris’ iconic 21st birthday look. Giving us some serious 2000’s nostalgia, Nicky rocked the deep cowl neckline dress, diamond choker, and even the tiara. Paris is far from furious though, and even commented “That’s hot” on the photo.

Olivia paid homage to her fellow Asian sis Peik Lin aka Awkwafina in her role in Crazy Rich Asians. She wore the recognizable red top—the bunny prints replaced by Hello Kitty—over a white, long sleeved, button-up polo and striped trousers, plus a short blond hair. She posted the outfit on Twitter with the shoutout: “Happy Halloween to everyone, but especially to all you crazy rich Asians!!”

Happy Halloween to everyone, but especially to all you crazy rich Asians!! #peiklin #crazyrichasians ??‍♀️? pic.twitter.com/cUOBsKIAkM

Singer Harry Styles paid homage to another great musician, Elton John. Elton has had numerous iconic outfits, but Harry went for his 1975 Dodgers concert, complete with the crystal-covered baseball cap and sleeves, and of course, the oversized, embellished sunglasses. He pulled this off nicely, we would’ve loved it if he performed some of his songs, too.

harry styles dressed up as ELTON JOHN for halloween pic.twitter.com/qK6zGzVRT4

Yeah, the others are good, but we think Rita takes the cake for this one. She went all out to recreate Post Malone’s look, and it paid off. With the tattoos—including his face tattoos—the curly hair and beard, the bling, plus props like a bottle of Bud Light and a stick of cigarette, she was barely recognizable and could seriously pass as the rapper’s double. Post has yet to comment on the actress’ tribute, but netizens have already given her the crown for this year’s Halloween.

Ima get Halloween started for you the right way… postttyyyyyy I LOVE YOU BRO @postmalone…ratatatatataata wassssss gooood!! And this is also a BIG thank you to getting me to 14 million!

Related stories:
Noah Centineo dressed up as this Disney character for a Halloween party
All the times the Kardashian-Jenners won Halloween
Please don’t buy this sexy Meghan Markle Halloween costume
These babies had the best ‘Crazy Rich Asians’ costumes

Previous
Apparently, raping someone is common practice for policemen

Next
These babies had the best ‘Crazy Rich Asians’ costumes