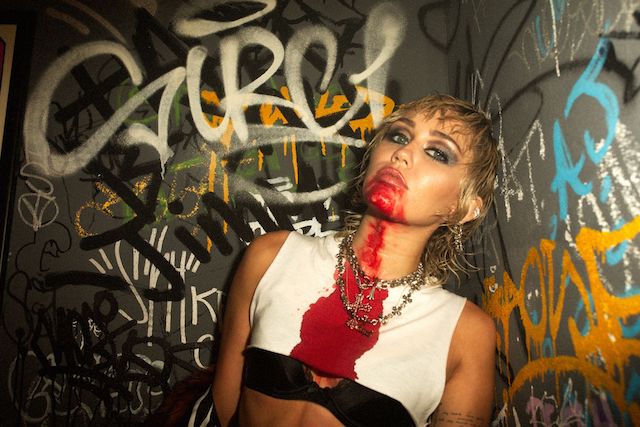 The year has been saved. All thanks to the music of Miley Cyrus.

Today, the singer-songwriter finally dropped the album and it’s the perfect soundtrack to our Friday—actually, make that the rest of 2020. If you’ve been closely following Miley Cyrus, the look and direction she took for this album come as no surprise. In fact, you would probably say that “Plastic Hearts” is a culmination of sorts. The pop rock “Breakout” studio album, her first one that wasn’t released through Disney, has been leading up to this and we’re getting a little emo.

Plastic Hearts is Cyrus’ seventh studio album and with it, she cements her place at the top of the pop icon slash rockers of today. The 80s-inspired LP sounds like danger and heartbreak. In an interview with Apple Music, she lists “addiction, karma, family, peace, fear, divorce and Joan Jett” as the things that have “shaped her life and recent music.” She also admits that she’s been “channeling her inner Debbie Harry”—creating an alter ego to help her “go anywhere in her imagination.” It’s not hard to guess who her muses were for this but the music is undeniably Miley.

The 15-track no skip masterpiece features collaborations with Billy Idol, Joan Jett, Dua Lipa and Stevie Nicks. So far, the reviews have stated that “Plastic Hearts” has earned the honor of carrying such big names. Cyrus has made enough of a name all by herself to be called anybody’s successor but she’s definitely doing her idols proud.

Fans have also been showering her with love. She has us all dancing and kicking with tracks like “WTF Do I Know” and “Plastic Hearts.” She also has us collectively crying with the likes of “High” and “Never Be Me.” Cyrus says that she’s feeling all the love and well, she deserves it. “My PLASTIC HEART is overwhelmed by the support I’m receiving tonight! I was fucking born to make the record I’ve just released! To my fans who have been here from the beginning, I appreciate you more than I can properly articulate. To anyone I’ve ever loved or lost, THANK YOU,” she wrote in a tweet.

My PLASTIC HEART is overwhelmed by the support I’m receiving tonight! I was fucking born to make the record I’ve just released! To my fans who have been here from the beginning, I appreciate you more than I can properly articulate. To anyone I’ve ever loved or lost, THANK YOU. ☠️

Among the celebrities who have publicly greeted her as Mark Ronson, Portugal The Man and Rina Sawayama. We’d love to see a collab between Cyrus and Sawayama but for now, we’re hanging on to this super relatable tweet:

Here are some of the other tweets from fans that have us laughing or going, “Same!”

“Plastic Hearts might be one of my favorite records ever released. I just think she [Miley Cyrus] is an incredible artist and her discography is timeless. She saved 2020 and music! ROCK ON!” – Michael Jackson via Ouija board. #PLASTICHEARTS pic.twitter.com/vNtzWtcpCC

Are you streaming “Plastic Hearts” right now, too?

Photo courtesy of Sony Music and The Rest is Noise PH

Related Stories:
Watch out, music charts—Miley, Dua, Shawn and Justin are dropping collabs today
Is Miley Cyrus’ new song ‘Midnight Sky’ a collab with Dua Lipa?
BTS digs Alicia Keys’ cover of ‘Life Goes On’ as much as we do
Aespa got K-pop stans swerving with their debut single ‘Black Mamba’

Next
Some netizens think RC Cola’s new ad is insensitive