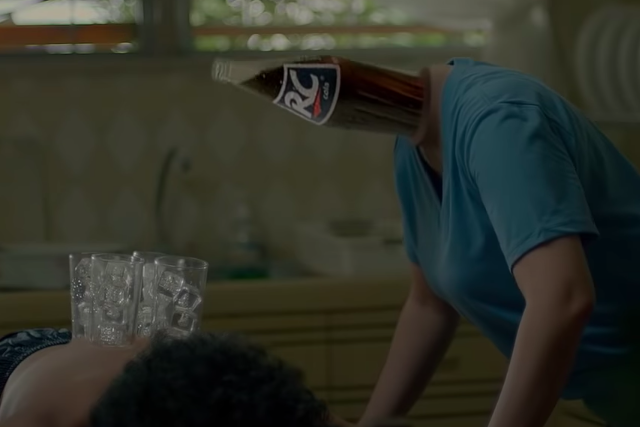 2020 has been an odd year, peppered with unusual events (like the runaway ostrich in Quezon City) and insensitive blunders that got the ire of the internet (like the Philippine Fashion Week Black Lives Matter campaign). RC Cola’s viral ad seems to come at the intersection of the two. It’s definitely odd and, to a number of netizens who managed to look past the shock value, insensitive.

The ad starts with a dark-skinned boy with curly hair entering the kitchen.  He sits down at the table and asks his mom, a woman with a lighter complexion and straight hair, if he’s adopted. He divulges that he is being bullied at school and further confronts his mother by showing his bare back…which has four drinking glasses attached to it.

If that’s not enough to make you do a double-take, his mother then reveals a secret of her own. She takes off her head and underneath it is a bottle of RC Cola. She puts ice cubes in the glasses on her son’s back and pours the cola in them. Then it cuts to a scene where the whole family is drinking from it using straws.

Many of the reactions to the ad are positive, saying its weirdness is a breath of fresh air compared to run-off-the-mill ads. However, there are those who describe it as ignorant.

Twitter user Jacs Sampayan posted screenshots of comments from his friend who explained why they find it offensive. “I didn’t find it creepy. I found it ignorant. It makes a mockery of adoption, it’s racist and also mocks Aetas. Meron kasing old, stereotypical “joke” na [may mga buntot ang mga] Aeta [kasi] they’re seen as less “human” than us lowlanders. The glasses on his back are representative of that,” noted the comments.

A friend pointed out that that RC Cola commercial had rather insensitive implications. I must admit, it went over my head when I first saw it. Discuss. pic.twitter.com/aphrBuZq2b

Twitter user Gerry Cacanindin pointed out, “Unpopular opinion: the RC Cola ad could have broken the stigma surrounding ‘ampons’. But it didn’t. It chose to go along the popular notion that being an ‘ampon’ makes you less of a human being.”

Unpopular opinion: the RC Cola ad could have broken the stigma surrounding ‘ampons’. But it didn’t. It chose to go along the popular notion that being an ‘ampon’ makes you less of a human being. Sayang. Missed opportunity.

Another user commented, “As an adoptive co-parent, the issue of adoption was taken into another level that I’m at a loss to even try to make sense of. Trivializing important issues just to sell your product is way too low!”

Just saw the recent RC Cola ad. Disturbing, to say the least. As an adoptive co-parent, the issue of adoption was taken into another level that I'm at a loss to even try to make sense of. Trivializing important issues just to sell your product is way too low!

Let this serve as a lesson to other creatives: When trying to set your art apart, make sure that you’re not doing it at the expense of others. Going viral by being out of the box isn’t such a bad aim, but we are still responsible for the message that the public takes from whatever it is we put out there.

Related Stories:
The runaway ostrich is officially making me believe that we’re living in a simulation
The internet is still split on Agot Isidro’s reaction to the Pacquiaos’ luxury bikes
Bizarre fancams that have us asking, “Is the internet okay?”
Aling Marie just became the internet’s favorite angry sari-sari store lady

Next
Album Review: ‘Be’ might be one of BTS’ best yet