Sex jokes in an official meeting about a disaster? Not cool

OCTOBER 9, 2018 President Rodrigo Roa Duterte answers questions from the members of the Malacanang press corps during the oath taking of the newly elected officers of the Makacang Press Corps. PHOTO BY JOAN S BONDOC
Share 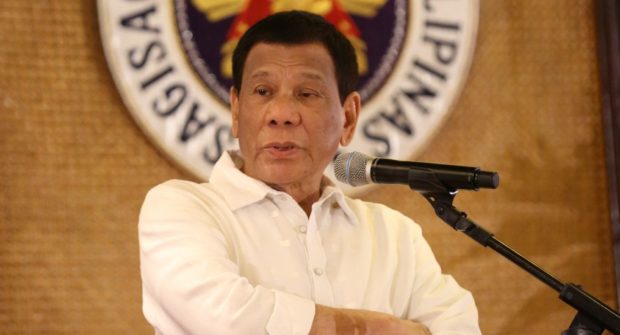 Today, the President finally met with other officials to discuss their response to the recent calamities that befell  the country, including two catastrophic typhoons that claimed scores of lives and left billions in damages. Not surprisingly (unfortunately), the meeting degenerated into locker room talk, laced with sex jokes because apparently people dying can’t stop old men from joking about their dicks.

At another point in the meeting, the President reacted to news about another colleague dying of COVID-19 by saying, “P*tangina, kulang sa babae kung ganon.”

Just a refresher on the typhoons: Typhoon Rolly, which struck the country two weeks ago, left a death toll of 25. Typhoon Ulysses, meanwhile, has a current death toll of 67, with many still missing. Making sexist jokes amid a grim situation is definitely not acceptable, especially from the country’s highest official.

Gabriela Rep. Arlene Brosas on President Duterte’s “undersexed” jokes during Ulysses briefing in Camarines Sur: Imagine still having the audacity to blabber inappropriate jokes when people literally drowned and died due to the series of calamities. | @JMAurelioINQ

Gabriela representative Arlene Brosas responded to these jokes, saying, “Imagine still having the audacity to blabber inappropriate jokes when people literally drowned and died due to the series of calamities. Instead of dropping sexist remarks, the government should [do] double time in providing emergency assistance. It should also apologize and explain its lack of preparedness and inadequate response tantamount to criminal neglect.”

Previous
Here’s why we need to support student strikes

Next
This mommy teacher bares her fears for the school year