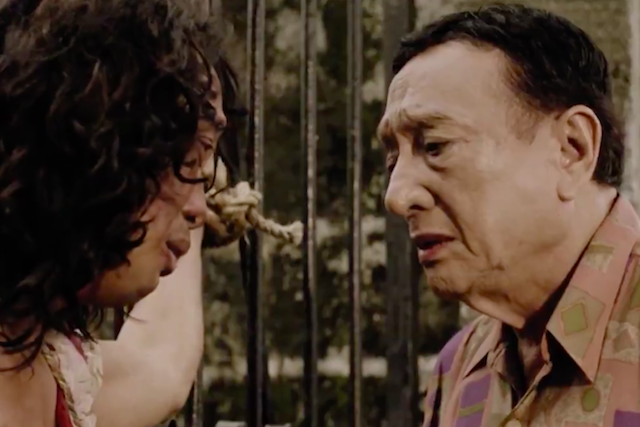 Markova is the alias of Walter Dempster Jr., a Filipino-Jamaican who was forced to become a “comfort drag queen,” a sex slave of the Japanese army during World War II, much like the documented comfort women. He spent his last years at The Home for the Golden Gays and passed away in 2005.

Watch his story unfold in the Film Development Council of the Philippines’s screening of the digitally restored and remastered “Markova: Comfort Gay” at the Pista ng Pelikulang Pilipino from Nov. 20 to Dec. 13.

Starring Dolphy and his sons Eric and Jeffrey Quizon as Markova in different phases of his life, the biographical dramedy recounts his hardships before and during the Japanese occupation. Director Gil Portes said that the three leads had a rare triumph when they simultaneously won the Best Actor and Best Actress awards in the 2001 Brussels International Film Festival.

“Directing Dolphy in Markova was a very rewarding experience. It is one of the highlights of my directing career. One of my dreams was realized when I was able to direct an icon like Dolphy,” said Portes, who also worked with Nora Aunor in “’Merika.”

This year, the Pista ng Pelikulang Pilipino is showcasing 80 short films and 90 full feature films at four virtual cinematheques. You can access these movies, along with the special Sandaang screening of “Anak Dalita,” for free. You can also avail the early bird, half run and day passes to join exclusive events like panel discussions and watch their premium selection. Register on their website so you don’t miss out. Ready your tissues while you’re at it.

Related Stories:
Jasmine Curtis-Smith and Enchong Dee explore alter Twitter in ‘Alter Me’
‘Lingua Franca’ just became the first film by a trans Filipina to win top prize at this US film fest
These statements from the SOGIE bill hearing got us rolling our eyes
Faces of Pride: The Golden Gays on how drag culture saved them

Previous
You can now be ‘Alone/Together’ with LizQuen on Netflix