The badass moments in TV herstory 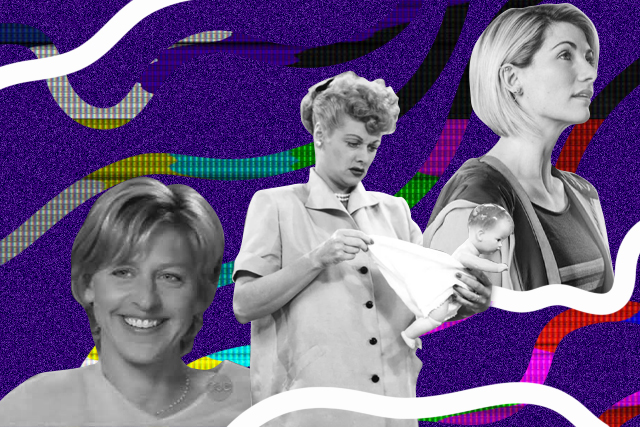 This November holiday began during the first World Television Forum in 1996 where leaders met to discuss the role broadcast TV plays in communication and globalization. Of course, this holiday also covers the shows we love to binge-watch.

Today, we’re focusing on groundbreaking moments in TV herstory. This includes firsts by badass actresses and milestones celebrating representation on the small screen. Let’s look back, shall we?

Lucille Ball and her pregnancy

During the second season of the hit ’50s sitcom “I Love Lucy,” actress Lucille Ball discovered she was pregnant, reportedly causing panic. Eventually, CBS agreed to write it into the show, but Ball was only allowed to say she was “expecting” because “pregnant” was too vulgar. (Weird) Despite this very backward rule, Ball still made a splash as the first visibly pregnant actress to star in a sitcom.

Would you believe that “damn” was the first curse word said on primetime TV? This was ad-libbed by Doris Packer in the 1965 series “My Favorite Martian.” In one episode, her character Miss Pringle received a gold watch for being Teacher of the Year. Her reaction to the award was, “Damn thing probably doesn’t even keep time.” Packer wasn’t penalized for saying this, but she did make history in the most unique way.

What an incredible thing to be a woman. Happy International Women’s day to all the amazing women out there! You inspire me every day ?

Lynda Carter officially starred as Wonder Woman in 1975. She was the first superheroine to have a TV show, becoming a women empowerment and gender equality symbol since then. Four decades later, Gal Gadot took up the mantle in the DC extended universe (DCEU).

At 19, Oprah Winfrey became the first and youngest African-American female anchor at Nashville-based news station WLAC-TV. Her former co-anchor Bill Goodman told Newsday that she was a hard worker and a perfectionist because “she knew that a lot of people were watching her. She did not want to fail.” Because of this job, Winfrey got more opportunities to anchor news shows and eventually host her own talk show.

Ellen DeGeneres coming out on “Ellen”

According to People, Ellen DeGeneres’ coming out on her ’90s sitcom “Ellen” and IRL was received with so much backlash. “The Puppy Episode” was reportedly criticized by religious groups and advertisers threatened to pull out because of DeGeneres’ coming out. It came to a point that the studio set was forced to undergo bomb sweeps for safety measures. Decades later, the episode has been viewed as a turning point for LGBTQ+ representation on TV. Today, DeGeneres is still hosting her show “The Ellen DeGeneres Show” which has been on-air since 2003.

Before “Ang Probinsyano” starring Coco Martin was relevant, there was “Mara Clara.” It starred Judy Ann Santos and Gladys Reyes as rivaling siblings. The show ran from 1992 to 1997 (1,165 episodes in total), making it the longest-running female-led teleserye in Philippine history.

We can’t imagine TV today without Shonda Rhimes, who’s responsible for badass female-led shows like “Grey’s Anatomy,” “Scandal,” and “How to Get Away with Murder.” As People noted, “The content of her shows—which includes female surgeons, lawyers and doctors, who are often unapologetic about prioritizing their careers (think Cristina’s departure from ‘Grey’s Anatomy’)—is always forward-thinking.”

In 2017, it was announced that Jodie Whittaker would become the first female Doctor in “Doctor Who.” Many fans (mostly men) hated the decision, but so far the reception to the show has been strong and Whittaker will return for a new season in 2020.

Related stories:
Men ask: If ‘Doctor Who’ is a woman, should there be a male Wonder Woman?
‘Gossip Girl’ reboot will feature a more diverse cast
YouTube “reality TV” videos: What’s real, what’s not?
Best of: TV shows and movies we obsessed over in January